Fault is one of the F-words I like to talk about. There’s failure as a society, and then there’s fault.

Faults are an interesting thing because, like failure, we are taught about it. If you have children, you’ll know that they learn it very early. “It’s not my fault!” I have had the most elaborate stories told to me by my children. As they get older, they get more creative on why it wasn’t their fault and they will even convince themselves of it! We spend all of this time with ourselves, with others, and in our organizations, trying to figure out who’s at fault.

I had a client who took fault-finding very seriously. The first year I worked with this client, every time something went wrong on a project, they would call the team into a room and perform a kind of public beheading. They would spend hours figuring out who in the group was at fault, why they were at fault, and they made that person feel really bad and humiliated about it.

When I go work in an organization now, we actually have something called a code of honor that we develop between the company, myself and their teams. One of the practices we put in the code of honor is around fault. The deceiving thing about fault is that you think you’re getting off scot free when it’s not your fault. But when something really bad happens in your life or your business and it’s not your fault, here’s the trick:  if it’s not your fault, then you are the victim of circumstance and there is nothing you can do to control, change or influence the situation. Saying that you have no fault makes you the victim of that circumstance. 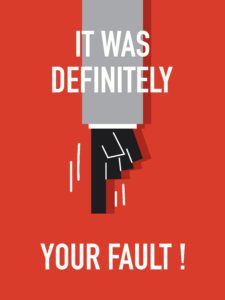 So how does this approach work in a business or group setting? I’ll give you an example. I walked into a meeting with a client and there had been a problem. People were upset and emotions were running high. I started the meeting by saying, “Here is what I think about what happened, and how I’m at fault in this, and what me and my team could have done to alleviate this situation.” Typically, people coming right out and owning up to things is unfortunately not a big human characteristic in our society today. What was interesting to me is that when I said, “It’s my fault” first, then the next person said, “Oh Elizabeth, there was this thing over here, and my group should have done this.” Then someone else said, “You know, if we had done that instead…,” and we ended up having this incredibly great conversation about fault. At the end of that meeting, there was not one person in the room who didn’t have something they could have done better. I call this now the “it’s my fault meeting” and I train organizations on this approach. I tell people that this is the space we’re coming into: We have a problem, we all need to figure out our fault in it and fix it together.

Fault is not a bad thing. Fault is how we get things fixed, otherwise we’re victims. Saying it’s not your fault because of where you are won’t get you anywhere. Fault is a powerful, useful practice. It’s my fault first. So, next time you’re in a meeting discussing a problem or a screw up, let people have that fault space. You’ll be surprised how quickly you can move through things versus fight over them.