You have probably observed in life that there are ‘talkers,’ and there are ‘doers.’ Quite frankly, we all shift between those two archetypes on a daily basis. There are people who are going to start a business, and there are people who start a business. There are friends who are going to lose weight, and friends who lose weight. You can see the trend here. You are either doing something, or not doing something.  This is the difference between using your perceptions and views to drive outcomes versus making a commitment to achieve your professional and personal goals.

There is no room for hoping, trying, wanting, waiting, attempting, thinking, (fill in the blank) if you want to turn an idea into a personal mission that delivers big outcomes. By committing to an idea, you will be empowered to choose to make an idea happen or not. You will see firsthand the power of a commitment to achieve personal and professional goals and how it can ensure that an idea happens. This Practice is called: Commit.

I refer to people who have mastered Practice of Commit and the other Practices I teach as Idea Leaders. They are people you recognize every day in your family, workplace, and community, who seem to make big ideas happen consistently, sometimes over vast periods of time, and despite unfavorable circumstances that would seem to indicate a high likelihood of failure.

How Perceptions and Views Drive Outcomes

My breakthrough moment with the power of commitment came during my first performance review at my second job out of college. I got great reviews, 4 or 5 out of 5 scores in everything; except attendance at work. In that area, I was given a 1, indicating very poor performance. I was flabbergasted. I thought that I was excelling at my idea of becoming the best and highest-performing employee at the organization. I was working 50 to 60 hours per week and on the road constantly, taking care of key clients. I was doing the job that I thought was being asked of me. But, I distinctly remember the manager telling me during the review, “ The perception is that you just aren’t here.”

It took me almost a year before I finally absorbed the wisdom of that review and took his comment to heart. Then I could distinguish the power of Commit. What I learned that day is that people’s perceptions and views may not be fact, but they are the reality you and your idea are in. You must be awake and aware of these perceptions when working an idea forward.

When you have an idea, it is usually created out of a set of views or perceptions you have about something. For example, you have the idea, “I want to start my own business.” You may have come to this idea because of a variety of views gained by what you perceive as your life experience, such as:

All of these views would give many people a very positive view of starting their own business. Yet, according to Bloomberg, 8 out of 10 businesses fail in the first 18 months. Similarly, according to the Small Business Administration, 5 out of 10 businesses fail in the first 12 months. These facts indicate that despite views of freedom and control, this ‘start a business’ idea can fail because it was launched under erroneous views on what are the realities of starting a business and having what it takes to succeed in business.

When I began researching the concept of how views and perceptions drive outcomes, I found that the action-specific perception model was rooted in Gibson’s ecological approach to perception. In the simplest terms, people perceive their environment, and events within it, in terms of their ability to act.

Therefore, what I realized after that fateful performance review was that the basis for my idea of being the best performing employee was flawed because it was delivered via my own views and perceptions on how a person who is the best employee would act. When, in fact, the management valued presence, communication, and routine contact and reporting to demonstrate performance and presence.

Since my idea was driven by flawed views of what it took to be the best performing employee, I became very unhappy at that job, and felt resentful and unappreciated. That drove me to withdraw even further from the office environment, fueling the perception that I ‘wasn’t there.” As views shifted, so did my outcomes. My idea of being the best performing employee died.

I refer to the performance model that I was caught in as the Cycle of Self-Fulfilling Prophecy. People who fail, quit, can’t stay focused, waver, and over time stop trying to launch ideas do so because they’re following a model of performance based on a set of perceptions and views. Those views drive their actions, and their actions drive their outcomes on that idea. Most of us have been taught to unconsciously follow this model from a very young age in most areas of our life. 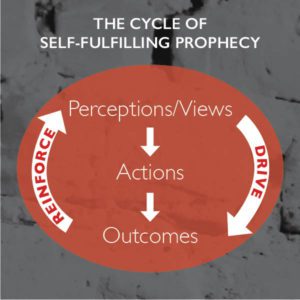 As you reflect on your own life, your perceptions and views are very transitory, and change over time. You may not think the same about something now that you did five years ago, or even an hour ago. So, if an idea is implemented using this model, as you get more negative feedback, you shift your views and perceptions. Then, your actions shift in response, and your outcomes become less successful. This reinforces more negativity, and you become more and more convinced based on your negative outcomes that you can’t move an idea forward any longer from where you are.